Cynthia Phelps, viola< Back to artists 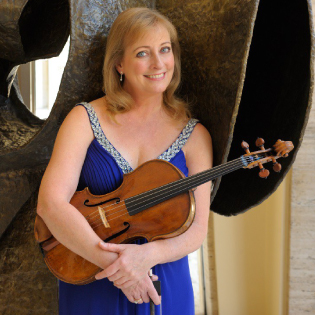 “Not only does CYNTHIA PHELPS produce one of the richest, deepest viola timbres in the world, she is a superb musician” (Seattle Post-Intelligencer). Principal Violist of the New York Philharmonic, Ms. Phelps has distinguished herself both here and abroad as one of the leading instrumentalists of our time. The recipient of numerous honors and awards, including the 1988 Pro Musicis International Award and first prize at both the Lionel Tertis International Viola Competition and the Washington International String Competition, she has captivated audiences with her compelling solo and chamber music performances. She is “a performer of top rank…the sounds she drew were not only completely unproblematical –technically faultless, generously nuanced– but sensuously breathtaking” (The Boston Globe).

Ms. Phelps performs throughout the world as soloist with orchestras, including the Minnesota Orchestra, New York Philharmonic, San Diego Symphony, Orquesta Sinfonica de Bilbao, and Hong Kong Philharmonic. She has appeared in recital in Paris, Rome, Los Angeles, Boston and Washington, and at New York’s Alice Tully Hall, London’s Wigmore Hall, and St. David’s Hall in Cardiff, Wales. She has also been heard on National Public Radio’s St. Paul Sunday Morning, Radio France, and RAI in Italy, and has been featured on The MacNeil/Lehrer News Hour, and CBS Sunday Morning.

This season, Ms. Phelps appears in virtually every major concert hall in New York City, including performances with the American String Quartet, the Kalichstein-Robinson-Laredo trio, and mezzo-soprano Suzanne Mentzer. She also performs in recital in La Jolla, as well as on tour with violinist Ida Kavafian and cellist Ronald Thomas. She looks forward to a new viola concerto written for her by Richard Danielpour. Her solo debut recording is on Cala Records, and can also be heard on the Marlboro Recording Society, Polyvideo, Nuova Era, Virgin Classics, and Covenant labels. Ms. Phelps and her husband, cellist Ronald Thomas, reside in New Jersey and have three children, Lili, Christinia, and Caitlin.