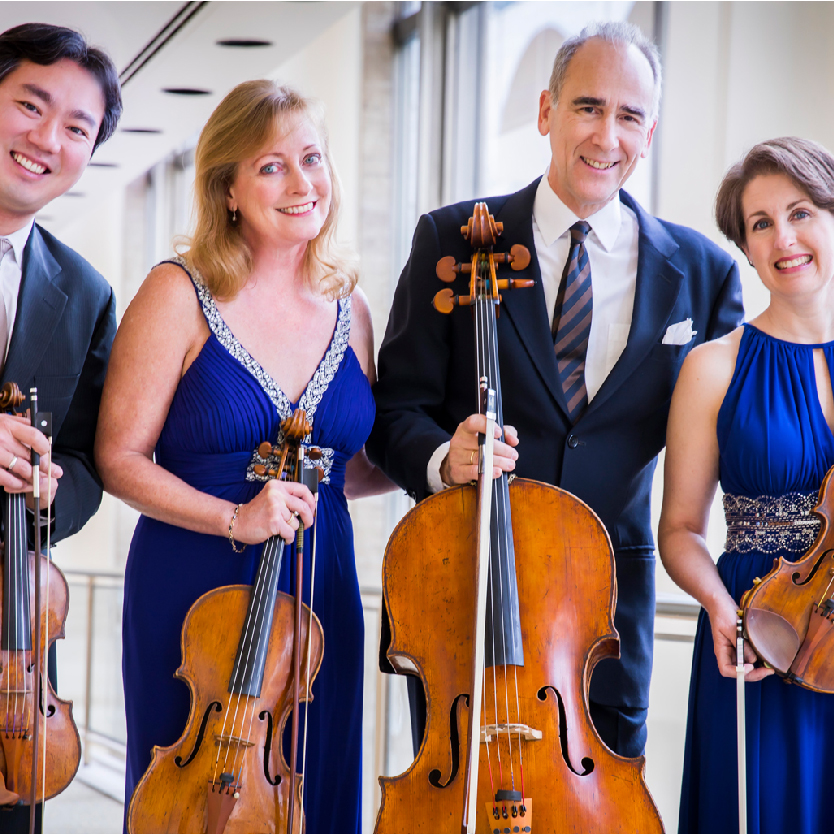 The New York Philharmonic String Quartet comprises four Principal musicians from the Orchestra: Concertmaster Frank Huang (The Charles E. Culpeper Chair); Principal Associate Concertmaster Sheryl Staples (The Elizabeth G. Beinecke Chair); Principal Viola Cynthia Phelps (The Mr. and Mrs. Frederick P. Rose Chair); and Principal Cello Carter Brey (The Fan Fox and Leslie R. Samuels Chair). The group was formed in January 2017, during the Philharmonic’s 175th anniversary season, and made its debut as the solo ensemble in John Adams’s Absolute Jest in New York in March 2017, reprising the work on the Orchestra’s 2017 European tour. The quartet has since appeared at the Montreal Chamber Music Festival, at Charlotte Concerts, and in a tour of South Korea. In the 2018–19 season the ensemble makes its debut in Houston, San Francisco, and Miami. All four members are multiple prize winners, have appeared as concerto soloists with the Philharmonic and orchestras around the world, and have appeared frequently in the Philharmonic’s chamber music series at David Geffen Hall and Merkin Hall.

Frank Huang has performed at the Marlboro Music Festival, Ravinia’s Steans Institute, Seattle Chamber Music Festival, and Caramoor. He frequently participates in Musicians from Marlboro’s tours, and was selected by The Chamber Music Society of Lincoln Center to be a member of the prestigious CMS Two program. Before joining the Houston Symphony as concertmaster in 2010, Frank Huang held the position of first violinist of the Grammy Award–winning Ying Quartet.

Cynthia Phelps performs with The Chamber Music Society of Lincoln Center, Jupiter Chamber Players, and the Santa Fe, La Jolla, Seattle, Chamber Music Northwest, and Bridgehampton festivals. She has appeared with the Guarneri, Tokyo, Orion, American, Brentano, and Prague Quartets, and the Kalichstein-Laredo-Robinson Trio. She is also a founding member of the chamber group Les Amies, a flute-harp-viola group with Philharmonic Principal Harp Nancy Allen and flutist Carol Wincenc.

Carter Brey has made regular appearances with the Tokyo and Emerson string quartets, The Chamber Music Society of Lincoln Center, and at festivals such as Spoleto (both in the United States and Italy) and the Santa Fe and La Jolla Chamber Music festivals. He and pianist Christopher O’Riley recorded Le Grand Tango: Music of Latin America, a disc of compositions from South America and Mexico released on Helicon Records.